An old Chinese curse says "May you live in interesting times". On Friday, November 13th 2099 we had an interesting Fall 2009 warrior campout.

There was a delay getting started. The original plan was for the brothers Magical Warrior and Wise Wolf to meet at my house and follow me as I picked up Hawk Dancing from school and headed to Camp Mack. I was going to take my canoe on the roof and my motorboat on its trailer, so we could get to the campsite in one trip.

The brothers had not shown up yet so I went ahead to Hawk Dancing's school. On the way, huge gusts of wind threatened to blow the canoe off, despite its being tied down well. I returned home with the youngun and removed the canoe.

Magical Warrior and Wise Wolf still hadn't shown up. Knowing it would be dark by 5:30, we got on the road about 3:00. Minutes after leaving, Magical Warrior called me on the cell phone. They were just leaving Orlando (45 minutes away).

I gave them directions to Camp Mack. Part of the directions included following the Lake Kissimmee State Park signs, since the park is about 1/4 mile from Camp Mack's entrance.

Hawk Dancing and I went ahead to a campsite on the Kissimmee River channel not far from Camp Mack, knowing we wouldn't have time to go much further and return for the others before dark (my boat has no lights). We dropped off our gear and set up one tent to "reserve" our site. As I arrived back at Camp Mack, Magical Warrior called to ask where to meet me. I told him I was walking from the boat ramp to the entrance.

It soon became clear there was a problem. Magical Warrior and Wise Wolf weren't showing up as expected. It occurred to me that, since my directions had included following the Lake Kissimmee State Park signs, maybe they were waiting at that park entrance.

I began walking to my truck to drive to the park, but just then they pulled in. A ranger at the state park had suggested that maybe I was waiting at Camp Mack since I was not at the park.

Together at last, we loaded the boat and headed for camp. We got there just before dark and got the other tent up.

We weren't up very late. Everyone had had a long day and was tired. We were in bed by 9:00. Just before that, I looked for my nighttime medication, and found I hadn't brought it. This was serious. I've missed a night before, but never two nights. I would have to go home for the medicine in the morning, but wouldn't be safe to drive.

We decided Magical Warrior woul drive me, while Wise Wolf and Hawk Dancing stayed in camp. We would leave at first light.

ALL NIGHT LONG we were treated to horrendously loud airboats passing our campsite about 50 feet away. In the morning, I figured Magical Warrior and I would likely return from my medicine run before the sleepyheads even got up.

Almost. They were in fact up when we got back, but they hadn't been up long.

Magical Warrior and Hawk Dancing attended the last warrior campout but Wise Wolf didn't. The other two helped me demonstrate some the skills we covered before.

Wise Wolf and I then moved one tent and some of the gear to the campsite I had actually planned on using originally, and returned to the first site to take down the other tent.

Afterwards, the very mature, quiet and reserved Magical Warrior passed the time waiting on the others to arrive by engaging in some ropework (click the picture below). 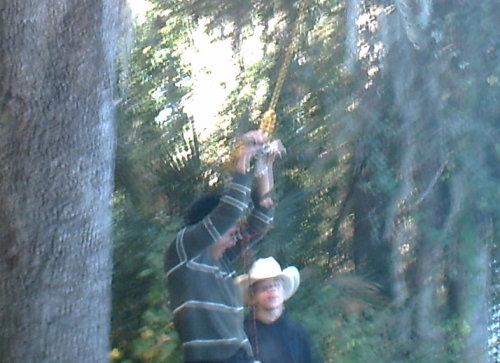 Like our first warrior camp, this one was open to the entire Wolf Clan. Our Chief and family were due to arrive Saturday morning.

Chief Wild Red Star and Head Elder Strong Bear soon showed up with Wolf Spirit and her friend Spirit Fire Horse. I explained the noisy river traffic situation and recommended to the Chief that we move to the other site before they unloaded their boat. She agreed, so we moved on to Candler's Point on Lake Hatchineha. 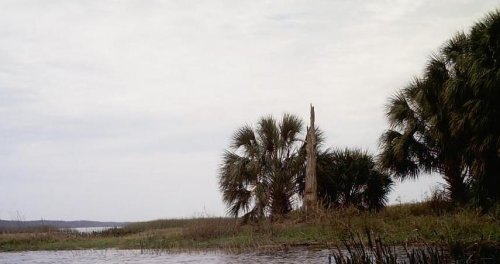 The landing at Candler's Point.

After setting up camp, I was surprised to find there were two more people due to arrive at Camp Mack. Strong Bear went to pick up Standing Bear and Crystal. This was Crystal's first time camping ever.

Here's Standing Bear and Crystal next to their - tent?

Once they arrived, we had 10 people in camp for a while. Magical Warrior had to work Sunday morning, so Strong Bear took the brothers back to Camp Mack before dark. (Strong Bear and Standing Bear did the taxi driving because Strong Bear's boat is much faster than mine)

With the ladies present, I decided to bring a biodegradable chemical toilet and a dedicated tent to put it inside so we had a 'restroom'.

Most everyone fished, but our star providers were Strong Bear with the most caught, and Hawk Dancing with the largest.

Saturday night, the airboat traffic was much more tolerable since most of them were across the lake rather than 50 feet away.

Not quite as tolerable was the "dawn patrol". Certain persons who shall remain nameless apparently got bored with sleeping and decided to get up hours before daylight and make an absurd amount of noise breaking up firewood, talking, etc.

(The truly baffling thing was that it wasn't the kids who got up!)

Sunday, the Chief and Crystal got a chance to try some of the matchless fire starting (no lighters either).

After lunch, we broke camp. It was amazing how much fascination was generated in burying the toilet contents - go figure.

Returning to Camp Mack was uneventful, except that right after everyone else left, I tried to start my truck to drive to the boat ramp, and the battery was dead! With help from another boater, Hawk Dancing and I got the truck running. Getting the boat out of the water was quite a challenge with a manual transmission and not daring to turn off the engine!

Hawk Dancing and I made a great team however, and we were soon headed home.

I think we all enjoyed our shot of Vitamin 'N' (nature)!