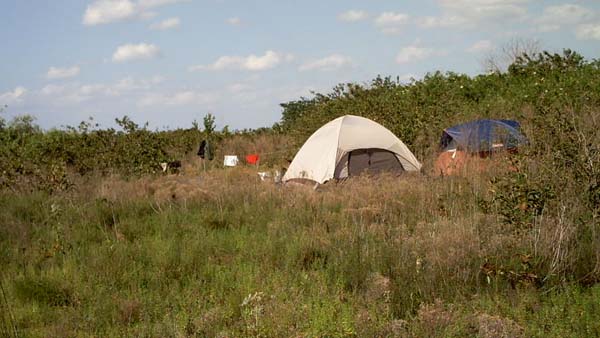 Well, the March 28-30 warrior campout went well even though not everyone was able to attend.

Those able to attend were (from youngest to oldest) Dancing Hawk, Quiet Bear, Magical Warrior, Bear Hawk, and of course, Grey Eagle.

We actually got started out from Camp Mack within about 10 minutes from our target time of 5:30 (the idea was to have camp fully setup before dark). We were traveling in a 14 foot Richline aluminum boat, and a 14 foot square-back canoe with a 3.5 hp motor.

Bear Hawk had a crash course in outboard motor operation when the "big" boat's motor didn't want to co-operate right out from the dock. But we got underway okay, with the big boat traveling about 12 mph, and the canoe around 6-8 mph. Bear Hawk had a GPS with the co-ordinates of Rabbit Island already stored, so he just had to follow the arrow on the GPS. Grey Eagle already knew the way, so all was well.

Sort of. The weather forecast greatly underestimated the wind on Lake Kissimmee. When Quiet Bear and Grey Eagle came out of the Kissimmee River into Lake Kissimmee, the "surf was up". The extremely choppy water forced the canoe to crawl along maybe 2 - 3 mph.

This of course affected travel time to the island, and provided Quiet Bear with an extra shower he hadn't planned on (as the waves splashed up against the canoe).

Suffice it to say, despite our plans, we didn't arrive at Rabbit Island till after dark.

So we unloaded the boats and carried our gear through the mud and brush before finally setting up the tent by candle and flashlight.

Yes, I said tent, not tents. Quiet Bear announced that he wasn't using a tent, but was sleeping under the stars. While Bear Hawk had a sleeping bag ready and waiting in the tent, at some point he decided to stay by the fire with Quiet Bear.

While the Bears chatted half the night by the fire and fed the mosquitos, the birds (Dancing Hawk and Grey Eagle) slept bug-free in the tent.

Saturday morning after breakfast, Grey Eagle took the big boat back to Camp Mack to pick up Magical Warrior. Winds were calm, and there were no problems getting back to the island.

After Magical Warrior had his tent up, we went to the one good shade tree on the island to work on some basic outdoor skills.

That night, Quiet Bear again rested under the stars, but Bear Hawk opted use his sleeping bag in the tent. Magical Warrior, on the other hand decided not to use his tent, and joined Quiet Bear.

Dancing Hawk meanwhile got permission to use Magical Warrior's tent, giving him all the room he could want for stretching out.

Coming home Sunday had it's charms. We started out in both boats (with Magical Warrior replacing Quiet Bear in the front of the canoe - Quiet Bear's idea).

The motor on the bigger boat began giving Bear Hawk trouble, stalling several times. After Grey Eagle took over and stll couldn't keep it running, we finally took the canoe's 3.5 hp motor, put it on the bigger boat, and towed the canoe behind. 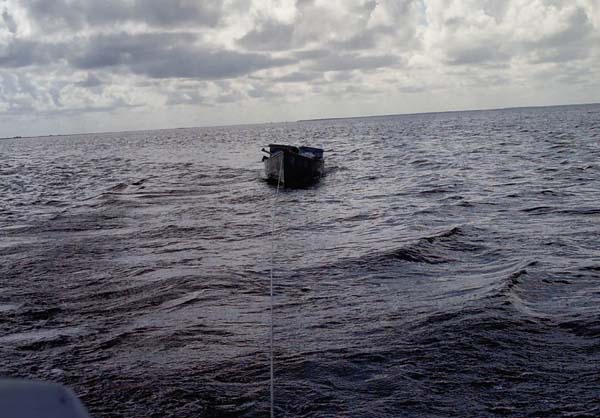 We then proceeded tearing up the water at a breakneck 4 mph all the way back to Camp Mack, arriving about an hour late. 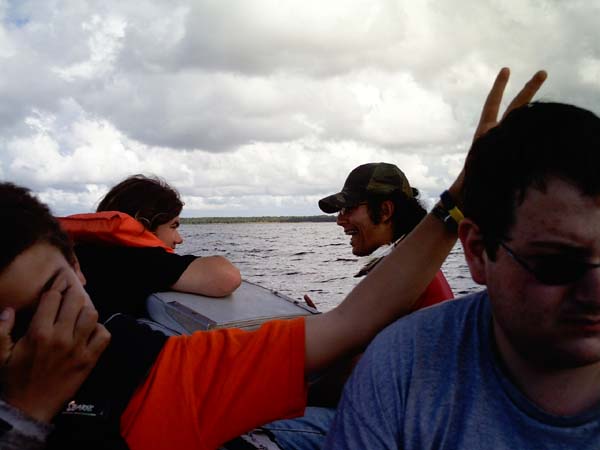 People watching us pull in must have thought the bigger boat had rescued the canoe, when in fact it was the canoe's motor that brought both boats in!

Watch and listen for our next warrior event. I would like to do a first aid class one Saturday this Summer.