We decided to have our first warrior campout on the last weekend in March of 2007. We also decided not to limit it to just warriors.

Well dang-near the whole clan showed up. ALL of the active members were there, including two that weren't born yet! 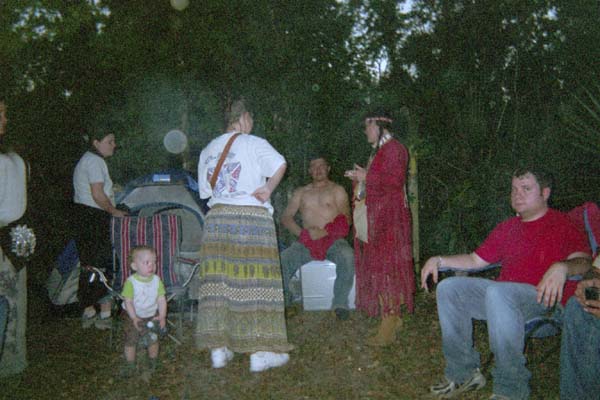 Autumn Wind was still expecting in this picture.

Setup went well, even with the excitement of a black snake passing through the spot where Chief and Strong Bear were trying to put their tent.

Wolf Bear and Whispering Sun surprised us by showing up with Little Bear in tow. Apparently, it is somehow possible to reach adulthood without ever having camped out. I'm not sure how it's possible, but it seems this was to be Wolf Bear's first time camping. They arrived later than others, and Grey Eagle had to mow an extra tent space in the clearing.

During the weekend, Grey Eagle showed everyone some of the Florida survival materials and foods like black spanish moss, monkey hair, smilax, and poke weed. (Which ones were the food again?)

Everyone got to sample the survival foods, and learned how to collect each of these items.

Nearly everyone had a cell phone, and each evening included everyone engaging in the traditional activity of playing with their ring tones.

We did some trail maintenance, and each warrior got a chance to obtain a shaft for a spear of their own.

After Saturday's activities, Grey Eagle let everyone know the solar shower was available, and where it was located down a trail from the campsite. 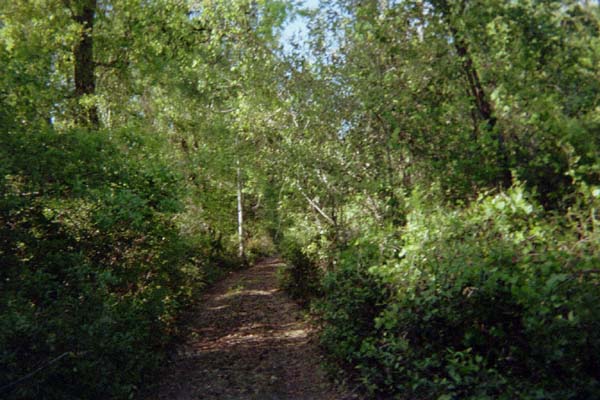 Chief Woman Red Star had her first experience of being "Natural in Nature". With Strong Bear standing guard on the trail, she bared herself and showered in front of the birds, squirrels, and armadillos, and found it to be wonderful. Who knew our chief was such a wild-child?

Later she surprised us by gracefully loping around (dressed, of course) saying something about Wood-nymphs!

David, Spirit Butterfly's and Grey Eagle's adult son attended, and surprised everyone by announcing he had decided to join the Wolf Clan. He had been attending for quite a while, acting as our photographer, but had held back from joining. The Chief performed a Naming for him Saturday night. He is now Bear Hawk.

We had told everyone to bring food for a pot-luck breakfast. It turned out great!

Click here to see all the pictures from this trip.