Our most recent get together wasn't a formal meeting, but a birthday party. Hawk Dancing was able to go out for a few hours to celebrate his birthday with family and friends. A good portion of the Wolf Clan was there. We went to a park on Anna Maria Island in Manatee County. Hawk Dancing had injured his hand the day before and had to keep the bandage dry so he couldn't swim in the Gulf, but the other younguns (and a few olduns) did.

Strong Bear wasted no time getting the fishing started. Within minutes of arriving he was busy fishing. 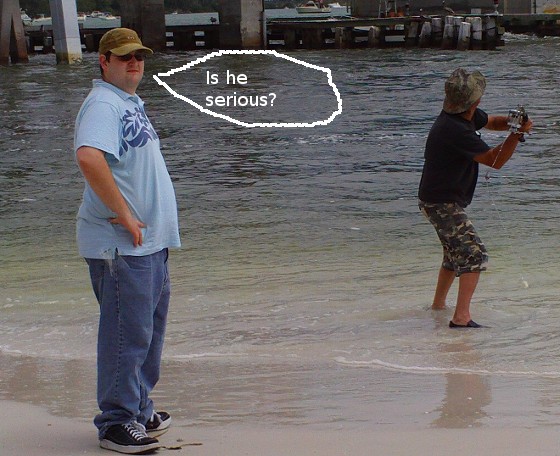 An interesting event occured while there. As we watched, two girls were riding jet skis. One of them seemed to be having trouble going against the current. She started toward shore, and was almost there when she just panicked and gave up. The current was swiftly taking her out toward the open Gulf of Mexico. Strong Bear cut the rope off his bait bucket and ran down to give the girl with the working jet ski the rope so she could tow the other one. The girls weren't paying attention and continued drifting out.

Strong Bear and Grey Eagle walked atop a derelict pier to try to get the girls' attention to get the rope. Finally the girl with the working jet ski saw the rope in Strong Bear's hand and came in and got it from him. As she started back out to her friend, a Beach Patrol vehicle drove up. Grey Eagle went to the officer and explained the trouble the girls were having. The officer was surprised. He had only come over to tell Grey Eagle and Strong Bear to get off the pier. He had no clue the jet skiers were having trouble!

The one girl came back to shore saying the rope was breaking (more likely the knot was untying), so Strong Bear got on the back of her jet ski and they went out to her friend. The Beach Patrol officer just stood and watched. He did make a radio call, but no boats were sent out. At this point, the people and jet skis were just little dots out in the Gulf. Once Strong Bear had tied the rope securely, they began heading back in, but the rough surf and the girl's inexperienced driving made the rope break. (It was a bait bucket rope after all, Strong Bear hadn't figured on towing with it). He had to double up the rope to keep it from breaking.

A Beach Patrol jet ski showed up, but just watched as the other two made their way slowly to shore. Before they landed, the first officer said they were good, and left. The girls left the disabled jet ski on the shore, and got on the other one and returned to the rental place to tell them to pick up the disabled one. Since the tide was rising, Grey Eagle held the rope on the disabled one to keep it from washing out to sea.

The girls came back as did one of their fathers. He wanted to thank Strong Bear for rescueing his daughter.

When all the excitement was over, we all sang happy birthday to Hawk Dancing, and talked about how because of his birthday we were there to help the girl. After all, the Beach Patrol had not paid them any attention! 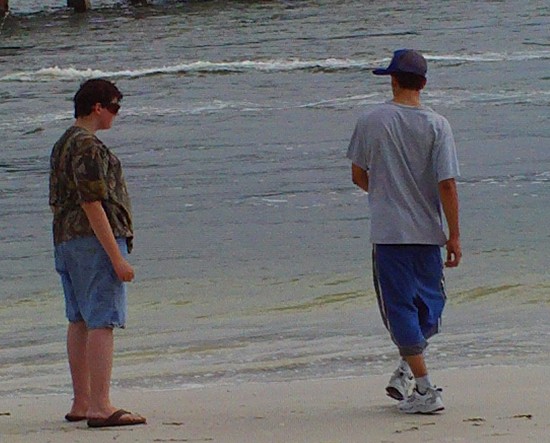 Hawk Dancing and Running Fox on the beach 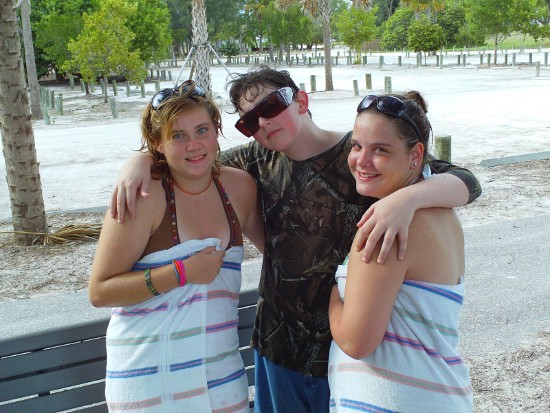 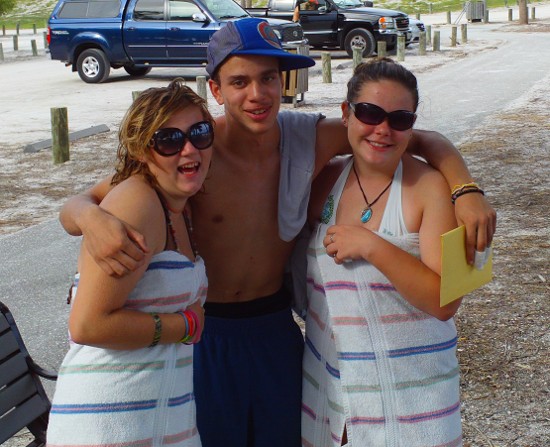